It’s not often that you hear of someone who is actually looking forward to coming to a hospital.

Daniel Lizzotti had spent the past few months suffering from Guillain-Barre Syndrome (GBS), paralyzed from the neck down. “I knew Hotel Dieu Shaver is where I needed to be.”

Coming to Hotel Dieu Shaver for rehabilitation gave back the use of his body.

“I spent months in hospitals, not being able to move,” he remembers. “I was a quadriplegic. I couldn’t breathe, and had a tube in my throat.”

Daniel went to the doctor in mid-December, and based on his symptoms, was diagnosed with GBS. A disease that attacks the nerves, its first symptoms are usually mistaken for the cold or flu. If not treated, weakness and tingling followed by numbness can paralyze the whole body. The exact cause of Guillain-Barre syndrome is unknown. The disease starts mostly in the legs, greatly affecting walking and movement.

“As the doctor was talking, my sister was researching everything she could. We knew nothing of GBS before this.” While about 95% of GBS patients make a full recovery, it’s a long process of rehabilitation to regain the muscle lost while bed-ridden.

Months of being in ICUs had taken its toll on his 43-year-old body. “I had heard of Hotel Dieu Shaver and knew they had more specialized therapy. I needed to get there, and that became my focus.”

To make matters more complicated, Daniel also had to endure being alone for most of his hospital stays. During the second provincial lockdown due to Covid-19, no visitation was allowed.

“My sister is my rock. Not having her there, it was hard to go through alone,” he says. “It was mentally tough.” Two programs unique to Hotel Dieu Shaver were also cancelled during the lockdown. “I was really looking forward to the Carpentry Program, and the Therapy Dog Visits. But I couldn’t enjoy either one!”

He became fast friends with his hospital roommates. “We watched basketball and golf together, got to know each other and our families,” he says. “I was surprised by the camaraderie, and we really helped each other, not only to pass the time, but we rallied and encouraged each other.”

Within one month of being at Hotel Dieu Shaver, the breathing tube was removed, the mechanical lift got his body moving, and he was walking with the aid of the parallel bars. “I was determined to walk,” he says. “There are too many things I want to do, that I have to do.” Day by day, thanks to his hard work, he improved. “You can let it take you, or you can decide to beat it. I had missed a bunch of living, and I couldn’t give up.”

He has high praises for this therapy team, including Jen and Yvonne. “Despite the Covid-19 restrictions, they made sure I got out of my room to do my exercises, and do them properly! The staff really explain how much and what you can do, and make you believe that you can do it.”

Finally at home, Daniel continues his therapy and goes on daily walks with his 9-year-old Maltese, Daisy.

“I wasn’t expecting to enjoy my stay at Hotel Dieu Shaver as much as I did. It was the best situation to get me to where I am now.” 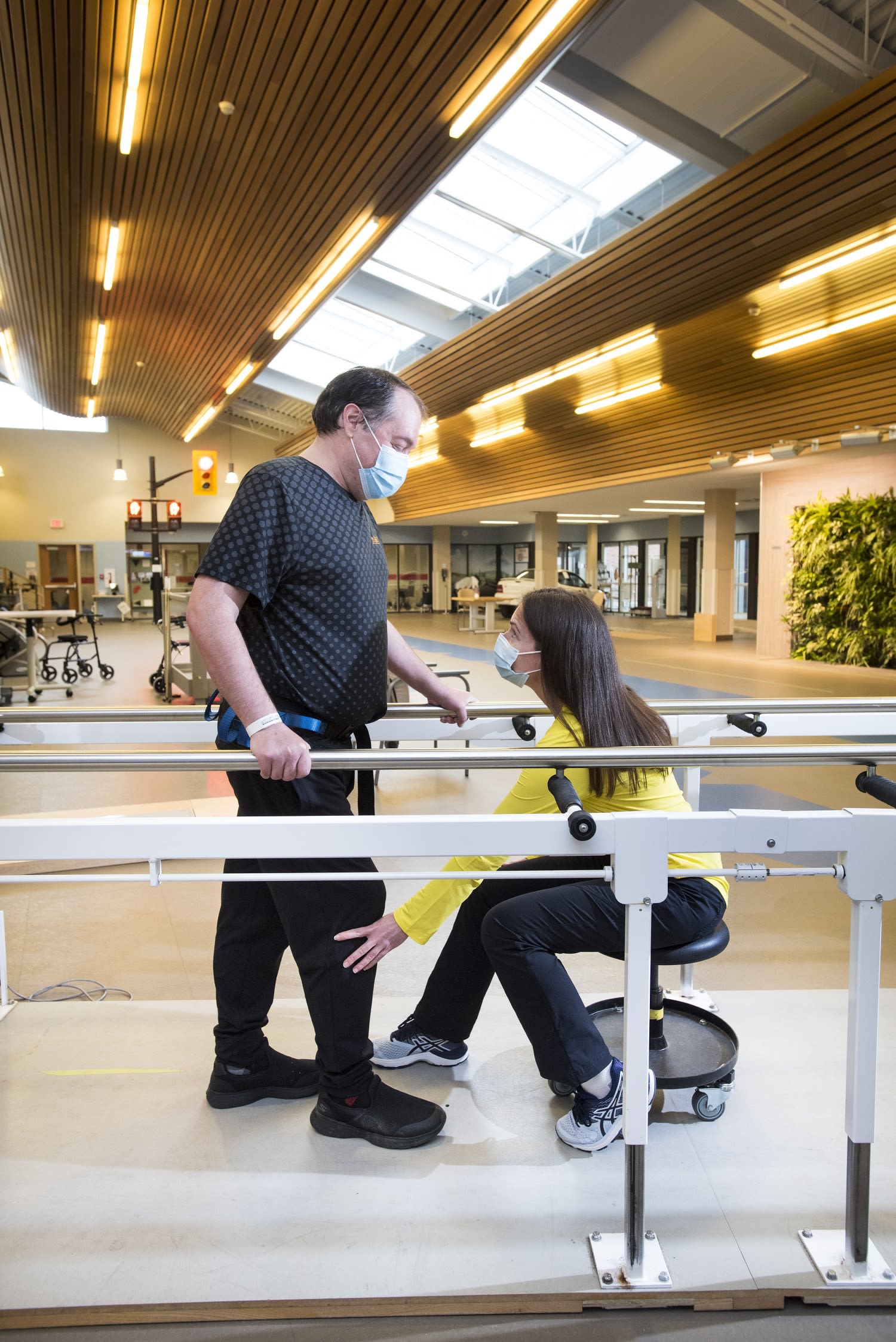