For Gaetano Girardi - his guardian angel helped save his life! 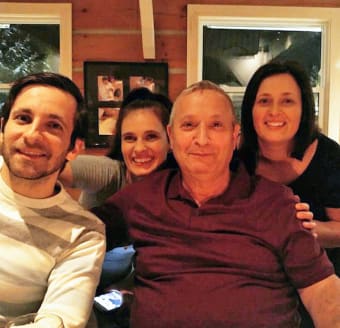 In early April, 72-year-old Gaetano was diagnosed with COVID-19.  His daughter, Natalie, booked a test for her father and also delivered the news that he was positive for the virus.

Gaetano made sure he stayed home, drank lots of fluids and took some aspirin. Soon after, he felt tired and needed rest. Again, it was Natalie who saw the signs that her father’s symptoms were getting worse. She asked her brother to check on him, and called her father multiple times.

“Daddy, you have to answer the phone. If you don’t, I’m calling 911.” Natalie, his guardian angel, got in her car and drove to her father’s house, calling 911 on the way.

Gaetano doesn’t remember anything after falling asleep, or the eight weeks he spent in a coma in the hospital. As his coma progressed, his lungs collapsed and Gaetano’s right side became paralyzed. On a respirator and feeding tubes, doctors told the family on four different occasions that Gaetano would not recover.

“The ICU doctor told my family that there was little hope,” Gaetano says. But his family, guided by daughters Natalie and Stephanie, refused to give up knowing their father and grandfather would find a way to survive.

“I don’t remember anything, but I know everyone prayed for me.”

The eight-week coma had left Gaetano with a paralyzed right side, his feet bent towards each other, his lungs permanently damaged, and he was almost unrecognizable with all the weight he had lost.

“My body felt like Jell-O,” he remembers. The formerly active cement worker who walked over 15,000 steps a day now couldn’t even lift his head on his own. Told that any recovery could take up to a year, Gaetano felt discouraged.

When he was first transferred to Hotel Dieu Shaver, his therapy team did an extensive evaluation. It took two people to transfer Gaetano to his wheelchair. At first, his therapy was to sit for two hours in a chair to help strengthen his body. “But after 15 minutes, the pain was unbearable,” he remembers. “My son told me, this is your second chance. Don’t blow it!”

With some time and patience, soon he was walking with the help of a walker, completing one lap around Hotel Dieu Shaver’s Courtyard. Then, three laps, and finally six laps.

For Gaetano, the encouragement from others made a big difference to his recovery.  “When you do therapy, you see the same people, in the same situation I was,” explained Gaetano.  “People who couldn’t get out of the chair. We encouraged each other, told each other to ‘go for it’!”

“The ICU doctors didn’t think I would recover,” Gaetano says. But his guardian angel, daughter Natalie, refused to let anyone give up on her father. “Without her, it would’ve been goodbye.”

Today Gaetano continues to do strengthening exercises at home, after he completed outpatient therapy at HDS.  He feels his body getting stronger. “I’m here, I’m alive. I can walk, I can talk. I have no complaints. Whatever happens now is a bonus.”