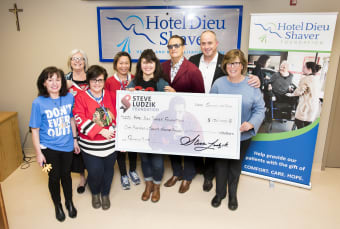 On Friday, the foundation made its largest annual donation to date — $120,000 — to support the Parkinson's rehabilitation centre at Hotel Dieu Shaver in St. Catharines.

The foundation has raised $876,000 for the centre, named after the former NHL player, coach and commentator, since it opened in 2013.

Ludzik, one of the most celebrated junior hockey players in Niagara Falls history, lighting it up for three seasons with the Niagara Falls Flyers, has Parkinson's and for years has been raising awareness and money to find a cure for the disease.

He also has Stage 4 liver disease requiring a living donor with blood type 0 to save his life.

He credited the people that work with him to help raise the money through events such as a golf-ball drop, golf tournament and celebrity roast.

Assunta Berardocco, a physiotherapist at the Steve Ludzik Centre for Parkinson's Rehab, said the program is "completely funded" through the foundation.

"Every dollar he raises goes right into the clinic," she said.

"With that, we've probably, to date, treated nearly 500 people in the Niagara region who are diagnosed with Parkinson's disease, which is quite significant. We offer the program twice a week for six weeks."

Berardocco said the centre is "really unique" in how it treats those living with Parkinson's.

"I really don't know of any other clinic similar in all of Canada in that, a lot of times in other communities, they're often referred for, say, physiotherapy, but what's different about the Hotel Dieu Shaver is we do provide a multi-disciplinary approach," she said.

"When (patients) are coming for the Steve Ludzik Parkinson's program, they get to see a speech therapist, an occupational therapist, a social worker, a nurse, a physiotherapist and a dietitian."

Tracy Geoffroy, executive director of the Hotel Dieu Shaver Foundation, said because the Steve Ludzik Foundation has been donating "more and more" money every year, the wait time for patients to enter the Parkinson's rehab program has been reduced "significantly."

"Steve, the family and the foundation have really become part of the Hotel Dieu Shaver family," she said, adding Ludzik's efforts have brought a lot of positive attention to the work being done at Hotel Dieu Shaver.

"They've been extremely engaged with us. We support their events that the foundation does. They're very supportive of what we're doing here. I know that Steve has a great relationship with the people here that run the centre. I know that he comes to the graduation for the patients when they graduate from the program. He's been able to come and meet some of the patients one-on-one."