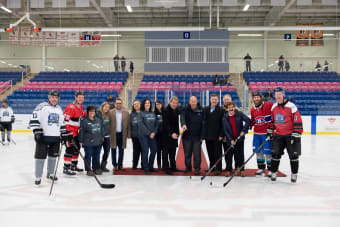 Hotel Dieu Shaver Foundation hosted their 6th annual Celebrity Ice Cup on February 27th and 28th. The event kicked off with Draft Night at White Oaks, where the 14 participating teams challenged each other for the top draft pick. The White Oaks Warriors, top fundraising team, earned the top draft pick, followed by Rankin Construction and the Meridian Marauders, respectively.

Teams, along with their drafted NFL alumni, then joined the next day’s tournament at the Gale Centre, playing three games each.

NHLers who joined the event this year included Wendel Clark, Paul Coffey, Brandon Prust and Darren McCarty. Over 200 players, 14 NHLers, and countless volunteers helped make this tournament a huge success - a HUGE thank you to each one! Through player fundraising, over $213,000 was raised for patient care and equipment at Hotel Dieu Shaver. Thank you!